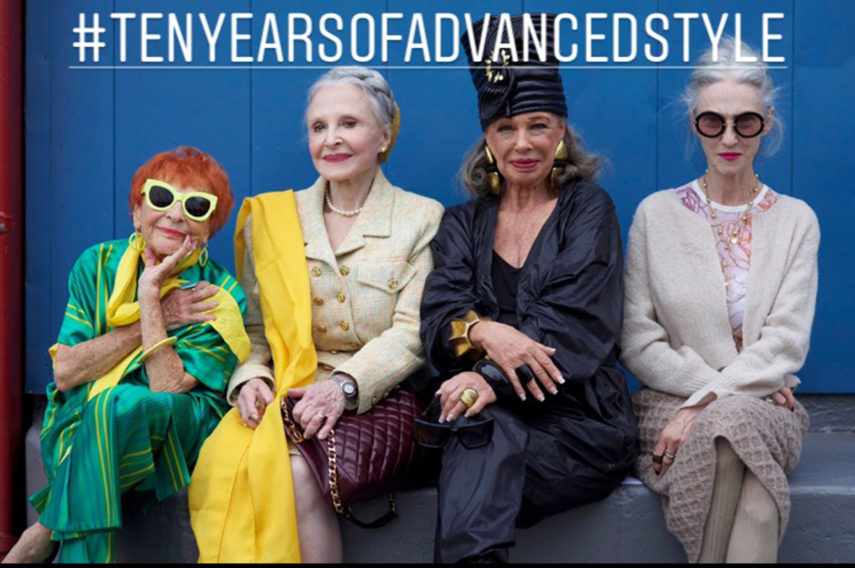 Today marks the 10th Anniversary of the first time I ever logged onto Advanced Style and posted a photo I had taken of two older women walking through a Seattle park. I had just moved to New York a few weeks before with a heavy heart. My beloved grandma had passed away and I had no idea which direction my life would take. I was 26. I started working various jobs in retail and finally landed a job at the @newmuseum bookstore, which provided me with almost enough to live on and health insurance! It was around this time that I started to befriend 93-year-old Mimi Weddell the most elegant woman I have ever known. I had seen a film about her life called, Hat’s Off, a few months before and decided to reach out to her. When we finally met at her uptown apartment filled from floor to ceiling with antique hatboxes I knew we would become dear friends. My move to New York was inspired by my grandmother telling me as a little boy that one day I should live in Manhattan if I wanted to do something creative. She had gone to graduate school at Barnard in  the 1930s  and constantly recounted stories about the glamor and excitement of New York City. Meeting Mimi helped to ease the pain of losing my best friend and greatest teacher. It was in Mimi’s apartment, ten years ago today, where I decided to start a street style blog documenting the style and sartorial savvy of the senior set.

I came up with the name Advanced Style because I wanted to show images of older people that would inspire others to look at aging differently– to change the visual language around growing older from images that focused on decline to an archive that would show advancement, growth, and increased freedom of expression, creativity, wisdom, and vitality. I had never taken a photo before, but I borrowed my roommate @kristopherwhitman ‘s @canonusa cool pix camera and hit the streets looking for inspiring older people. On my days off from the @newmuseum I’d hunt for hours dreaming of day that this would be my full time job. In these first few months I met Lynn Dell, @debrarapoport, Alice Cary, Mary Efron, Jacquie Murdock, @carolmarkel @beatrixost @suekreitzman — strong and creative women who expressed themselves boldly and lived vibrantly while dismissing so many of the biased and ageist views on  growing older. Almost immediately news outlets started writing about my work. When I received a call from my now dear friend @lucywillis asking whether I would consider doing a photo installation at @selfridges in London, I had to decide whether I would stay at my job or take a risk and try and make Advanced Style a full time job. Now ten years later I have had the incredible honor and privilege to photograph, befriend, and share the stories of thousands of older men and women around the world who have not only impacted my life in countless ways, but have helped to create a movement that has helped to shift perceptions of aging.

I want to thank everyone who has ever taken the time to write an article, share a post, and helped spread the wisdom, stories and creativity of the senior set. There is so much more work to be done, but as I watch a whole new community of older men and women continuing to spread images of positive aging online I  realize that we will no longer accept the idea that invisibility is inevitable result of a lifetime’s worth of achievement, learning and growth. We must celebrate those that have come before us. I  realize that my grandmother sent me to New York for a reason and that she has been with me the entire time. Thank you to everyone who has ever stopped to allow me to take your photograph, to all who have emailed or commented on my blog and Instagram, attended a talk or book signing, watched the Advanced Style Documentary and helped to encourage me to  keep hitting the streets looking for Advanced Style. My grandma Bluma started me on this path when I was a little boy, Mimi and all the women I met in New York guided me to take this early inspiration to new creative heights and all of you have allowed me to express my love and appreciation for my grandma for the last ten years. I can’t thank you enough. As Debra Rapoport says at the end of the Advanced Style Documentary, “Cheers to another glorious Advanced Style Day!”