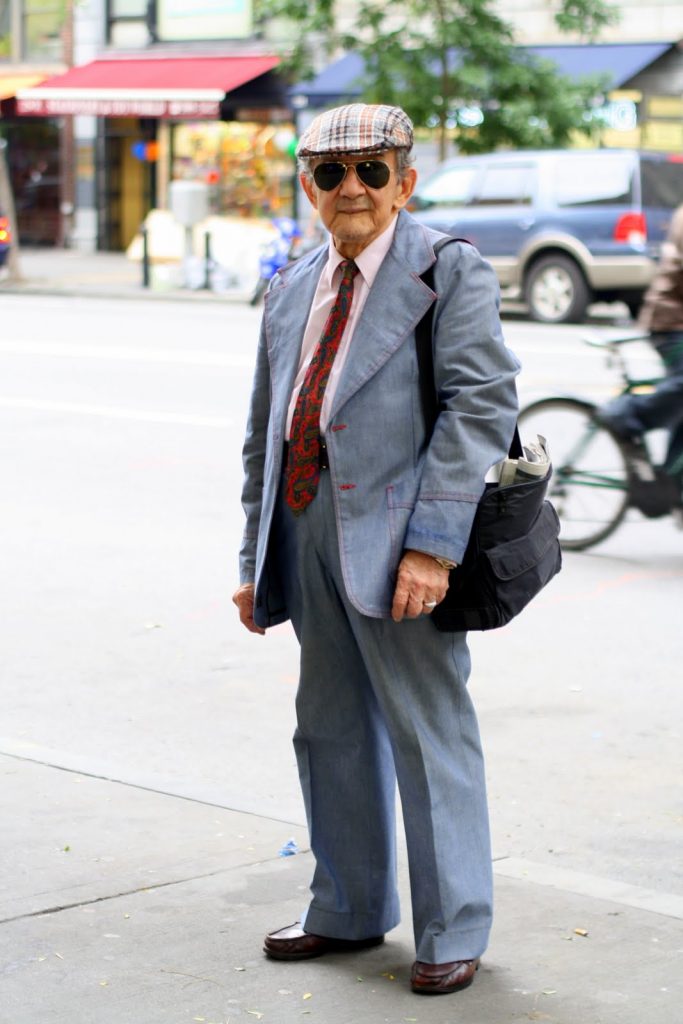 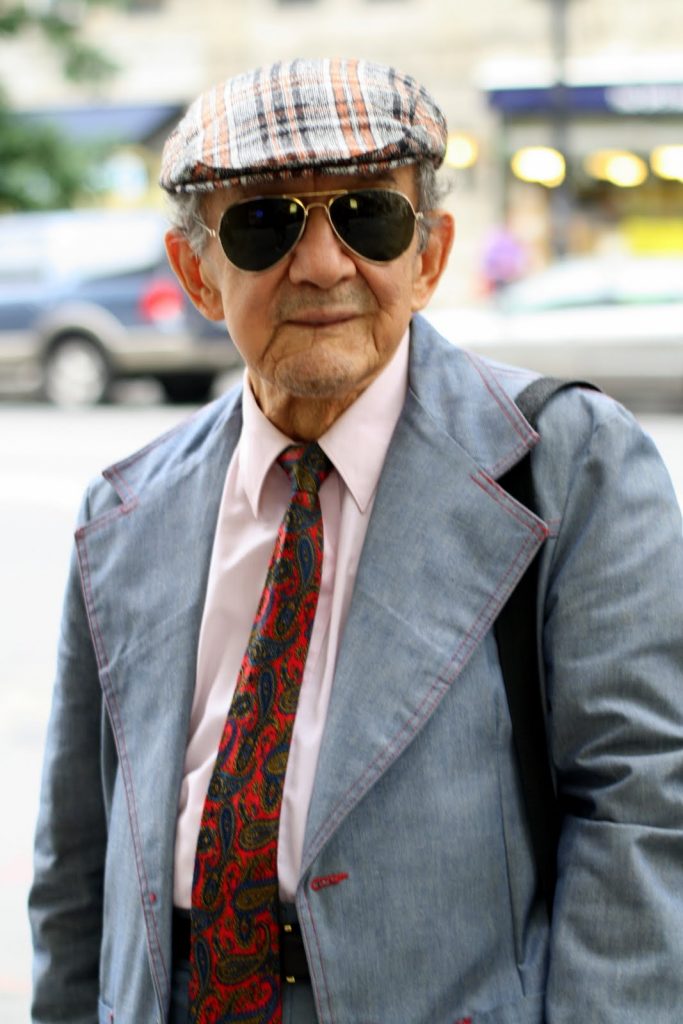 I saw this gentleman walking on the Upper West Side and asked if I could take his photo. He has a super cool look with his 70s style suit, aviator sunglasses, and paisley tie. It is guys like this, who still look great in items that they have had in their wardrobes for years, that really inspire me. His clothes may be old, but he looks fresh and hip! 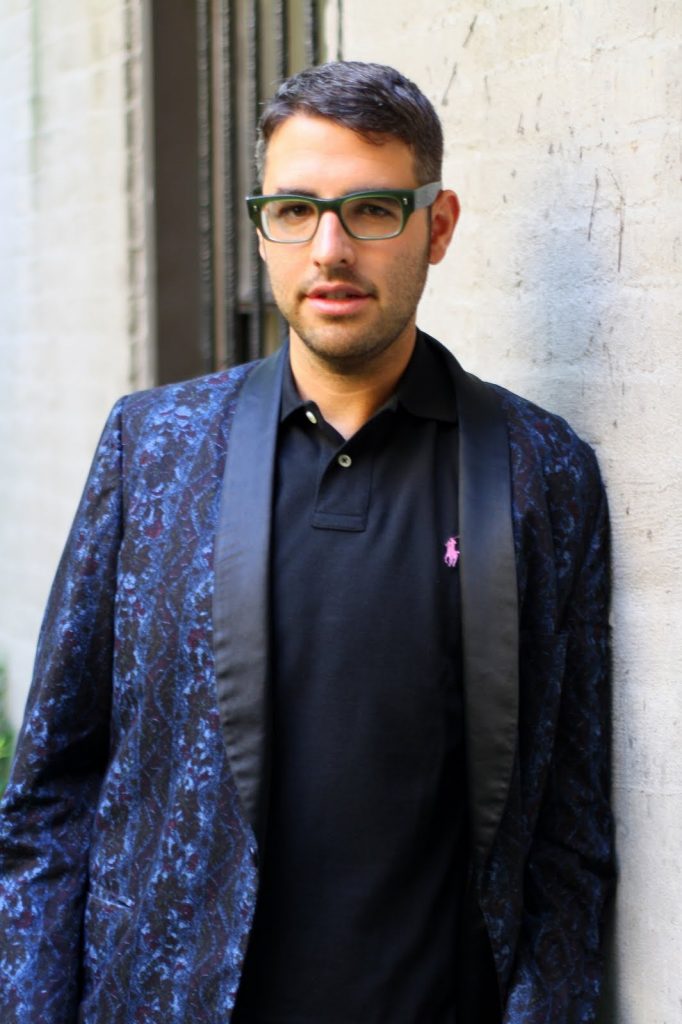 I am so honored to participate in the Ralph Lauren 100 Bloggers Unite Against Cancer
Campaign. The Pink Pony campaign is a global effort that has been dedicated to the fight against breast for over 20 years. Now extending to other forms of cancer, the mission of Pink Pony is to address the need of the medically underserved by bringingquality cancer care, access to cancer care, and earlydetection for those who need it most.

Join Polo Ralph Lauren’s worldwide initiative in the fight against cancer during
the month of October and celebrate 10 years of the Pink Pony campaign by texting
PINKPONY to 501501 to automatically donate $10.

Check out the link below to see the other bloggers included in the campaign, including our friends Refinery29 and Tavi The Style Rookie.

Click on this link
www.charitybuzz.com/RalphLauren for charity auction information.

I found the most charming and amazing website today. The OGS (Original Grandparents) is a site full of stories and wisdom from Harry and Barbara Cooper, a couple married for 73 years.The Coopers’ grandchildren share these stories through videos and stories posted on their blog. They write, “Barbara and Harry are a nice Jewish couple, married for 73 years, who’ve moved back to the old neighborhood, to L.A.’s first retirement community, Hollenbeck Palms. Of course, Boyle Heights has changed a bit since Barbara dubbed it “a Jewish Tijuana,” circa 1930! Barbara is a social butterfly and problem solver, Harry is a self-taught Zen master with a yen for science and exploration. We’ve enjoyed the wit, wisdom and weirdness of our grandparents for our whole lives, and think it’s high time the rest of the world got a chance. The OGs blog promises all Barbara and Harry, all the time. Tune in for a daily dose. (OGs stands for Original Grandparents.)

I feel very close to these two, as they remind me of my own grandparents Bluma and Jacob who were always so full of life and love. Bluma always laughed at Jacob’s jokes and Jacob would never leave the room without giving his beautiful wife a big kiss. As they got older they became separated because they could no longer take care of themselves. My mom and I would bring Bluma to see Jacob in his nursing home and they would hold hands and smile at one another for hours. Barbara and Harry are so lucky to have found a place where they can live together and get the care that they need. Read about their move into a new retirement community HERE .

Their spirit and and the spirit of my grandparents reminded of a saying from one of Fanny Karsts dresses,”Let’s Begin At the end.” Growing older can bring new beginnings. Lets share the stories and wisdom of our elders and keep their spirit alive. If you have any great clips of your own very special grandparents and can upload them to YouTube, I’d love to share a few here. Email me links to Advancedstyleinfo@gmail.com ! 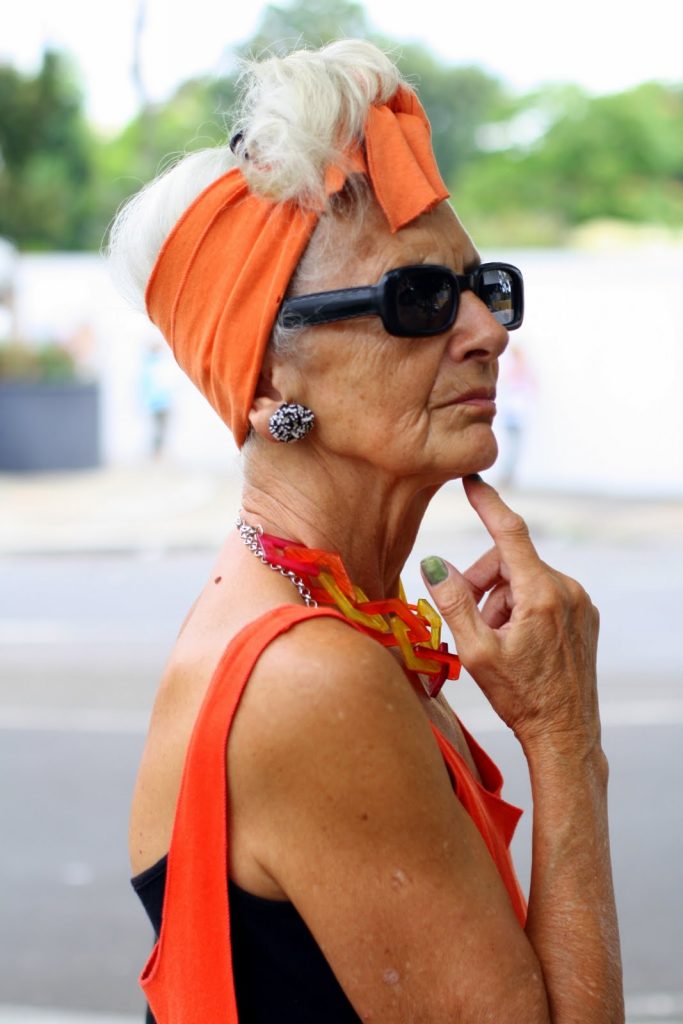 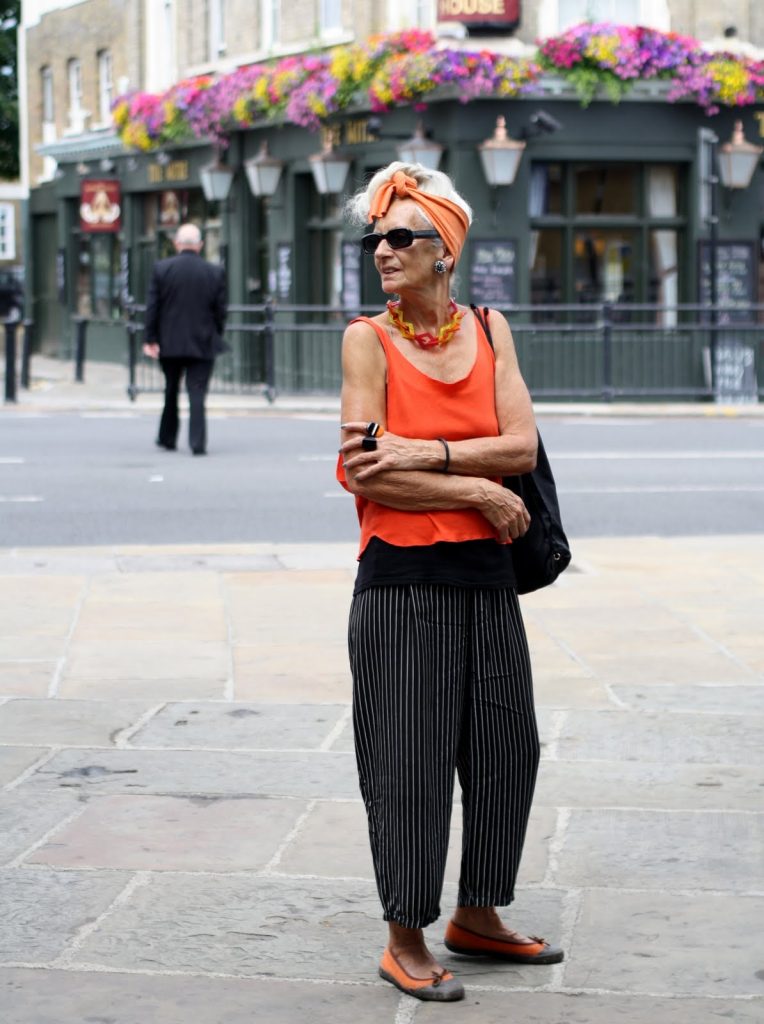 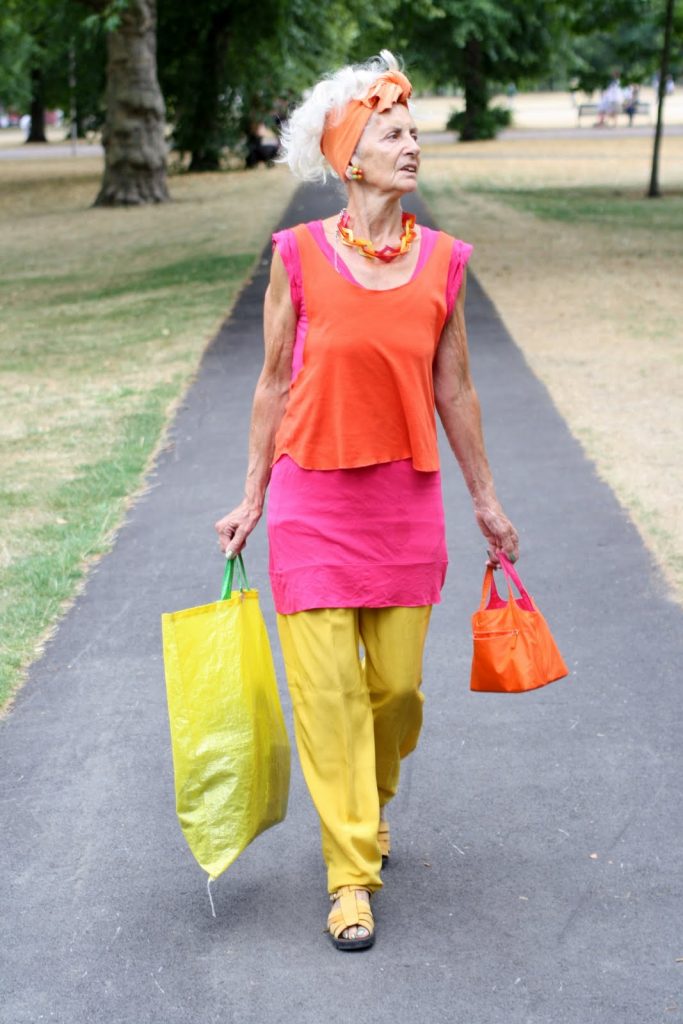 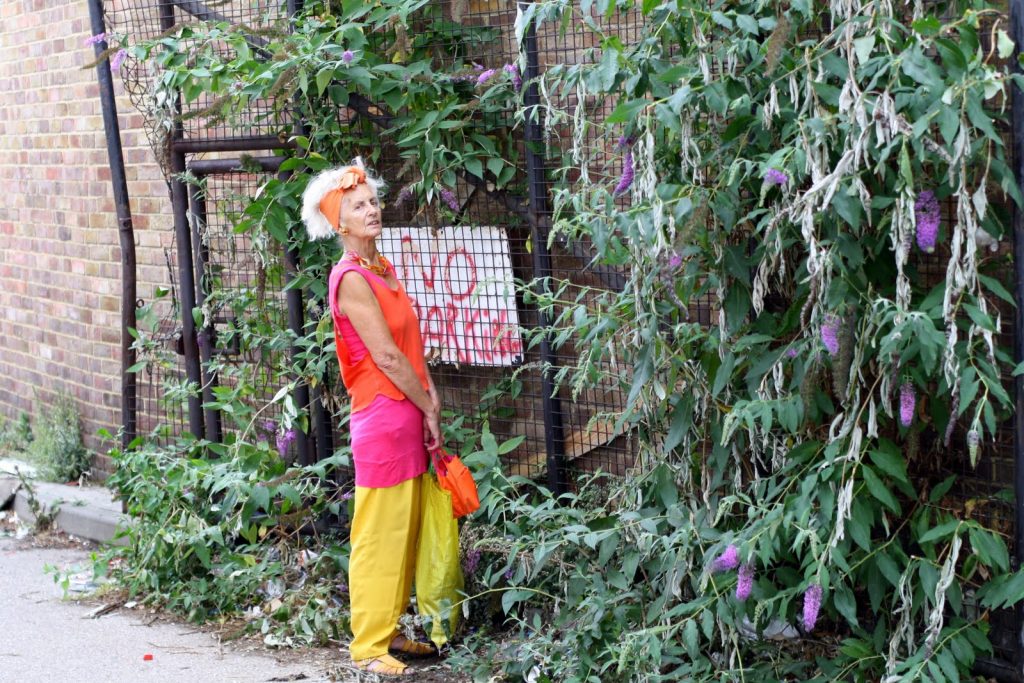 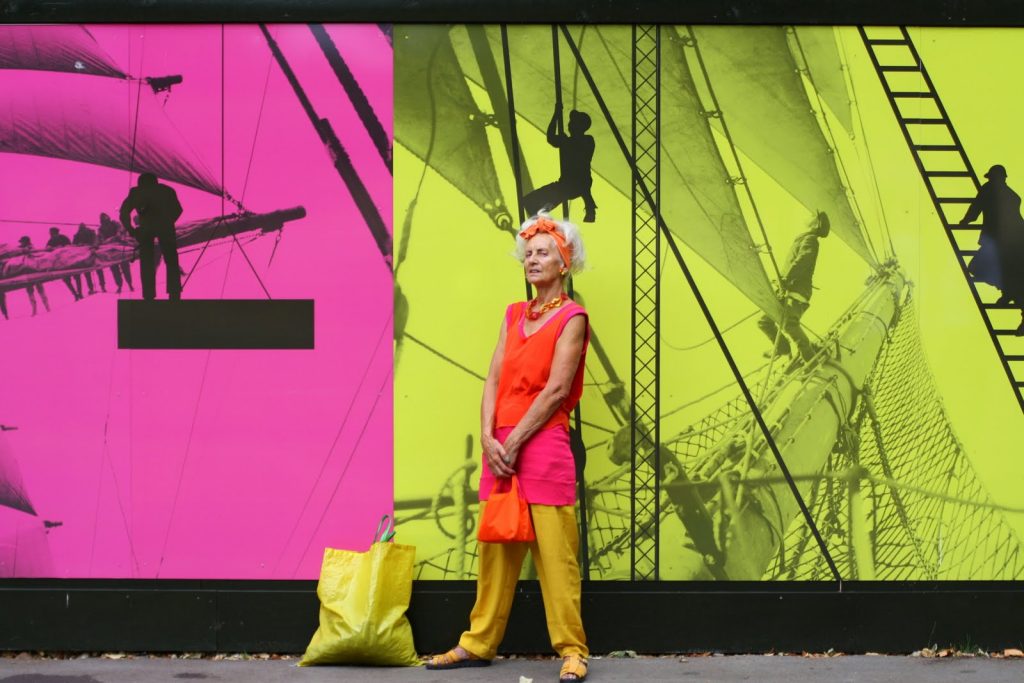 While I was in London this summer,Fanny Karst creator of the brilliant Old Ladies Rebellion recommended that I meet Bridget Sojourner. At 72, Bridget is full of life and energy. She gets stopped all over the world for her fun and fashionable attire and she revealed, ” As a young girl no one stopped me. I was quite like a lot of young girls. Now I’m unusual because I’m older.

Bridget had a long career as a health educator, but has always been interested in fashion. As a young girl she copied folios from Balenciaga and Schiaparelli and dreamed of being a designer, nun and actress. She fused these passions together as an educator, interested in peace and development. Her colorful wardrobe is almost a political statement. She says, ” When people started stopping me about my clothes I thought, I’ve been through feminism, racism, all the prejudices. I’m an activist and Ageism is the last bastion.” She thought about how to fight ageism and the idea that older people have to vanish in society by becoming a model in her 70s.

Many people believe that older people should act and dress a certain way. That they should step back and quiet their voices. Many people don’t pay attention to older people at all. It is my belief that creativity, style, and spirit advance with age. We can learn so much from our elders. I salute Bridget for her creativity, vitality and will to change ideas and challenge stereotypes. 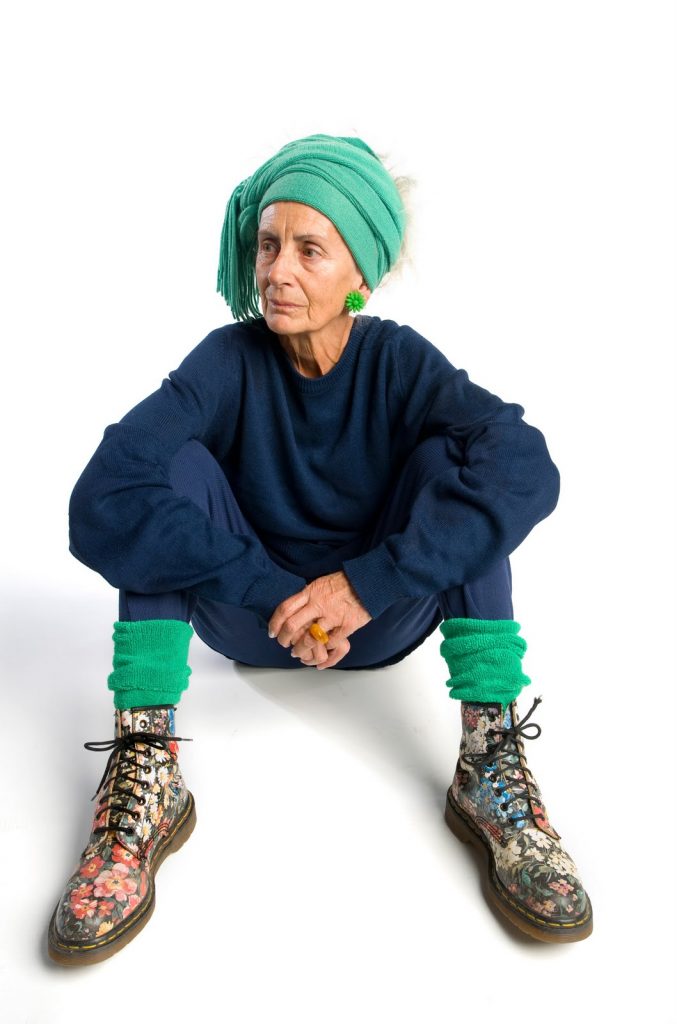 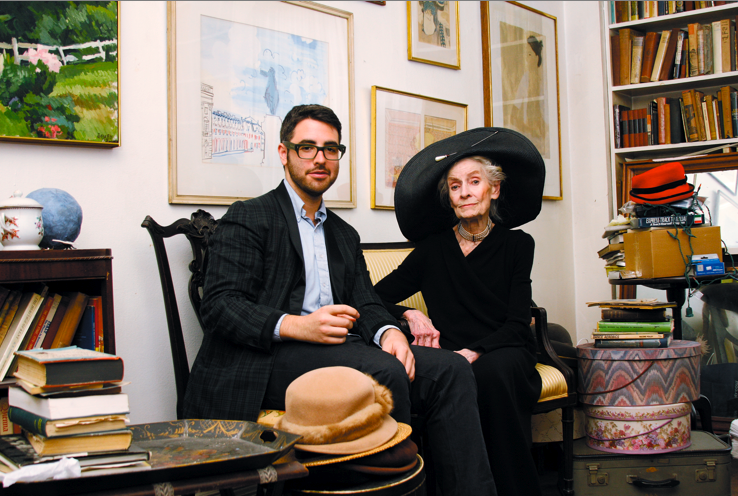 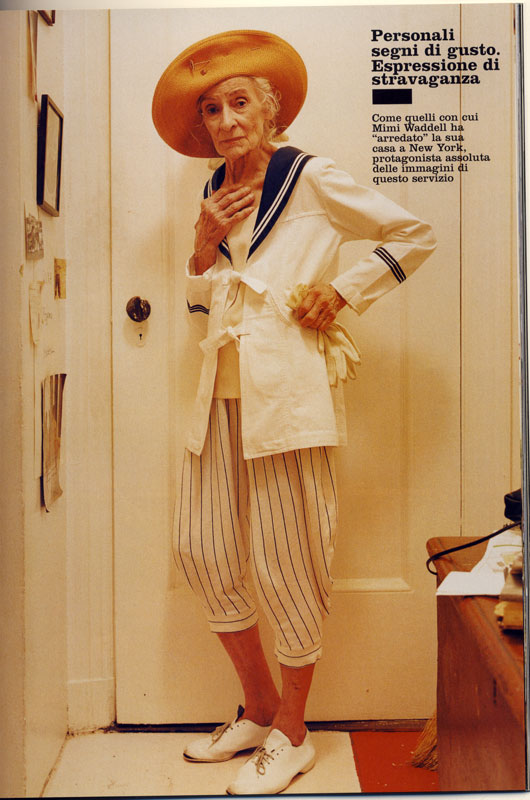 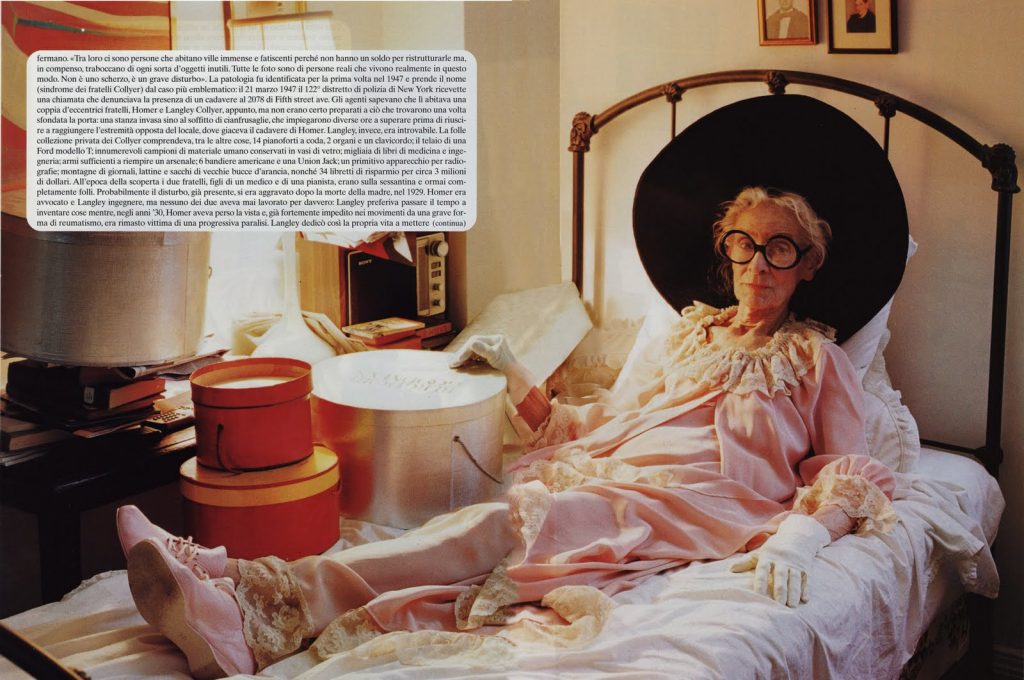 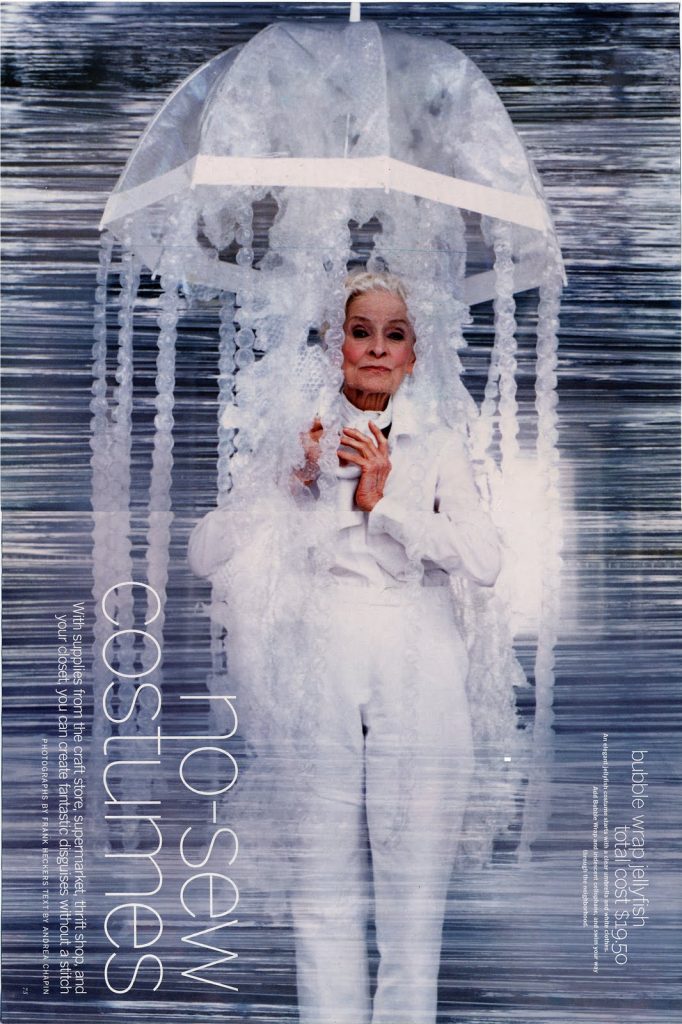 Today is my 29th birthday. It is also the Anniversary of my great friend Mimi Weddell’s passing. If you have been reading Advanced Style for a while now, you know that Mimi is a great inspiration to me. I met her a little more than two years ago, after moving to New York and seeing her documentary “Hats Off“.

Mimi was so graceful,insightful and willing to work on projects that she enjoyed. She began modeling and acting in her 60s and appeared in print ads for companies LouisVuitton, Burberry, Juicy Couture, and Nike, to name a few; in photo spreads for Vanity Fair and Vogue; on TV series including Sex and the City and Law and Order; and in feature films such as: Across the Universe, Hitch, and The Purple Rose ofCairo.

I strive to live by this extraordinary woman’s philosophy to “Rise Above It” in any difficult circumstance. Mimi never stopped learning and challenging herself, in fact she once said“There’s a lot to be learned, and I’m going to learn all the way to the stairway to the stars.” On my birthday I want to celebrate the life of this amazing woman and hope that my life will be as enriching and spectacular as her was!So remember, in the words of Mimi Weddell you must, “Dance through life” and enjoy every moment.

Check below for some wonderfully candid moments from Mimi’s last interview with film maker Jyll Johnstone. Jyll filmed Mimi for over ten years to make the award winning documentary “Hats Off” . I hope you get the chance to see this wonderful film and enjoy the clips below!