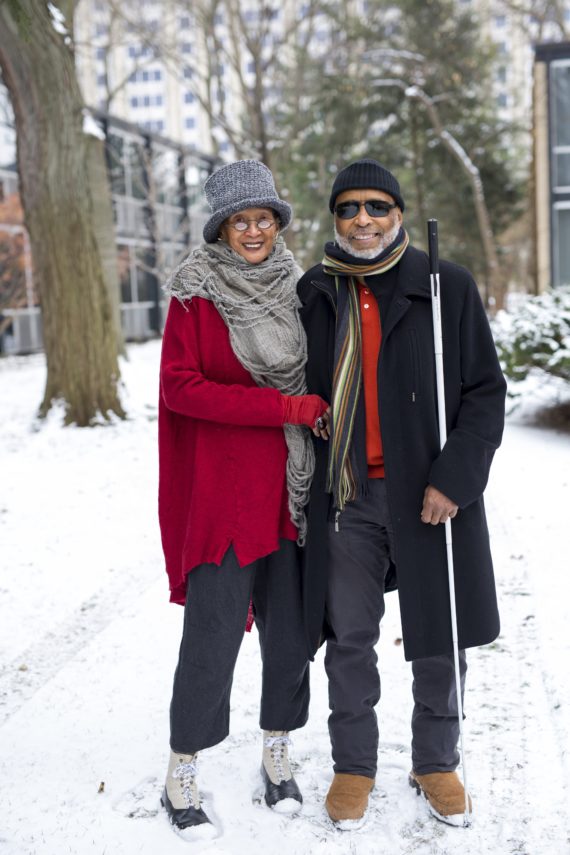 Thank you to everyone who has ordered my latest book Advanced Love. I wanted to share another from one of my favorite couples below:

S: I met John when he was a first-year law student and he needed a reader because he’s blind. We both ended up living in the same building. I was dating a friend of his at the time and after his friend and I broke up I started to read to John.

He had the most beautiful back of any man I had ever seen in my life and his arms were just magnificent. I used to peek at him through the crack in the door because John is an exercise nut and he’s made one out of me. He is a very nice human being, just a nice man. You don’t run across those too often anymore, then or now.

We started dating and one thing led to another and we have been married for about forty-five years. You know it’s up and down like everybody else, but he’s the best thing that’s ever happened to me. What can I say, he’s the love of my life.

J: I love her style. She is very much her own woman. Even though I’m not into clothes, I like it when folks comment on how I’m dressed because of her. Folks come into my house and say it looks like a museum. It’s eclectic, it’s unique, and it’s her. She’s made me more conscious of who I am and what I deal with. Sometimes I beat up on myself thinking I should do better and that I should have done better than I have, but she tells me she has observed that some folks who can see aren’t doing as well as I am. I recognize that I am blessed, but sometimes I need someone to tell me, you know, you are doing okay—and she does. – John and Sylvia